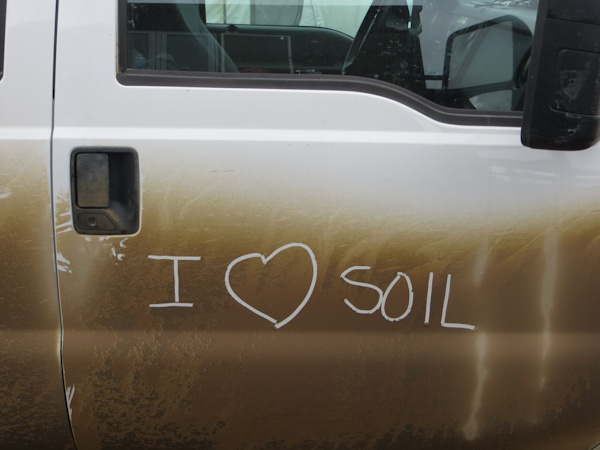 About 35 years ago, when most ecologists were still musing about how we’d deal with the ice age that models then showed was on its way, young scientists Gus Shaver, Terry Chapin and John Hobbie set up camp on an old abandoned airstrip at Toolik Lake on the North Slope of Alaska. Scientists tinker and so when they gazed at this wild and beautiful yet nutrient-poor place, bereft of nitrogen and phosphorous found in the temperate regions of the globe, they wondered what might happen if they added such amendments. Those young guys set into motion experiments on tundra plots of what became the Long Term Ecological Research site of Toolik Field Station — not big, just five by twenty meters — that are still playing out today, providing more and more bits of information that together begin to add up to a story about what is happening in the arctic regions of the world and why. 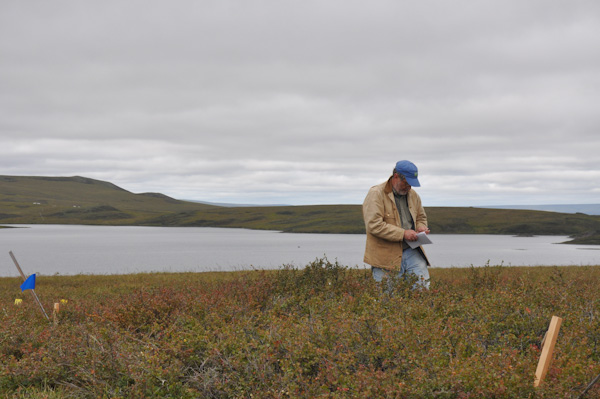 On Monday began The Pluck. The last one was in 2000, and this pluck is bigger and more involved than ever with dozens of people participating in collecting samples from the fertilized and control plots and assailing them with a battery of tests. The overarching plan is figure out what grows, crawls, respires, leaches, remains, and more, from the macro level of plant and animal species to the tiny stuff only discovered in chemical analyzers and under the lens of a microscope. It sounds complicated, and it is, but it begins with Gus simply heading up the hill from Toolik camp, getting down on the ground, and plunging a long, too-dull knife into the ground.

He takes this small hunk of the tundra, and 59 others like it, down into the lab, where he’s rallied grad and undergrad students, visiting middle school teachers and high school students, and colleagues and family members to sort. 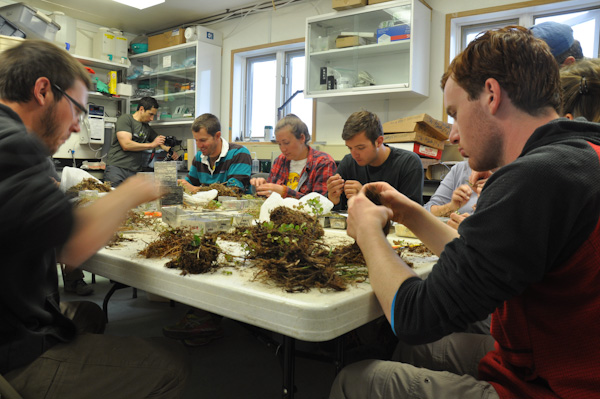 Lichens and feather mosses, woody birches and sedges with edges, cloudberry and more. Together, with the background of the Have A Great Day Spotify soundtrack, they sort… 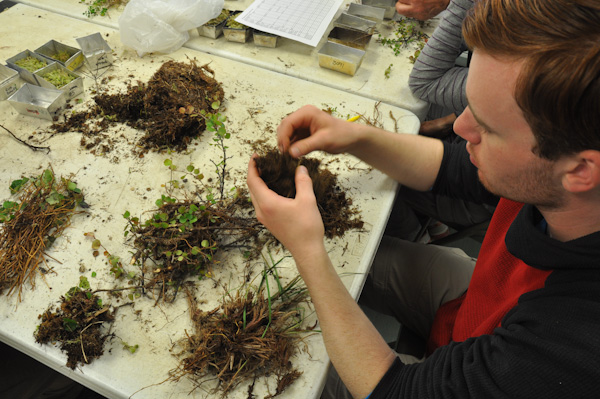 …and sort. This is the nitty gritty stuff of science.

That’s just in one part of The Pluck, one part in one lab trailer. In the other part of Lab 2, Jennie McLaren leads more nimble fingers and weary eyes as they separate roots from soil — a fuzzy distinction in these tundra soils. In Lab 1, Josh Schimel and his team pour potassium sulfate over soil and prepare samples to test for ammonium, phosphates and nitrates. Across the way, in Lab 9,  John Moore’s crew — Greg Selby, Bob Faris and Yamina Pressler — works late enticing any of the insects lurking in the tundra chunks into bottles of ethanol and divvying up the soil to head to other scientists in other labs preparing for other testing. 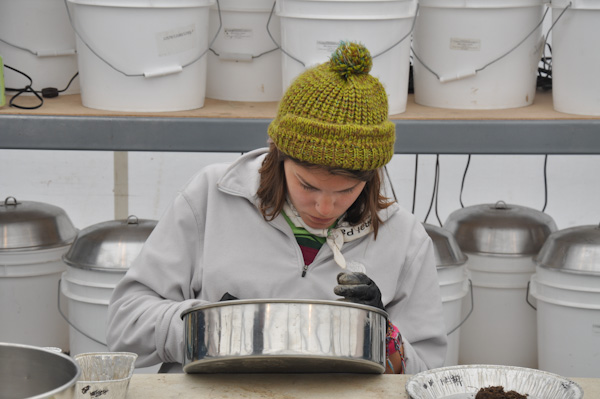 Other critters are caught by sucking them up with a leaf blower set on a reverse. “Hello! Housekeeping!” Ashley Asmus calls out as she and Taryn Flink approach others at work in the plots. 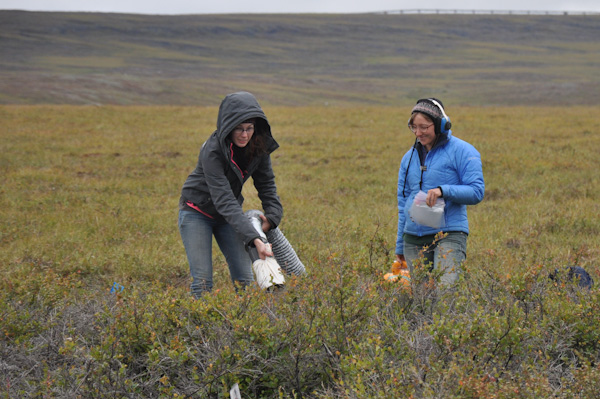 The whole Pluck will take about ten days, and then a year or more to process all the data and make sense of what they’ve found. Researchers have come from Massachusetts, Colorado, Michigan, California, and elsewhere and many will take samples back to their labs at home to continue the work after these Toolik days come to an end. The plant people and the root people and the soil people and water people will all need to talk, to bring the macro investigations into a greater focus. Will the results of earlier studies be confirmed? Is a fertilized tundra replicating what a warming tundra might look like, with more microbial activity in thawing permafrost, supporting larger and woodier plants? Is more carbon being released with the underground action? Is the arctic fast on its way to becoming a huge breathing part of the planet where there was once steady-state ice and frozen ground, exhaling more carbon than we’re already putting into the atmosphere? Or will all those bigger plants that are growing help suck carbon in, saving Manhattan from drowning? The answer may be in the most unlikely places. 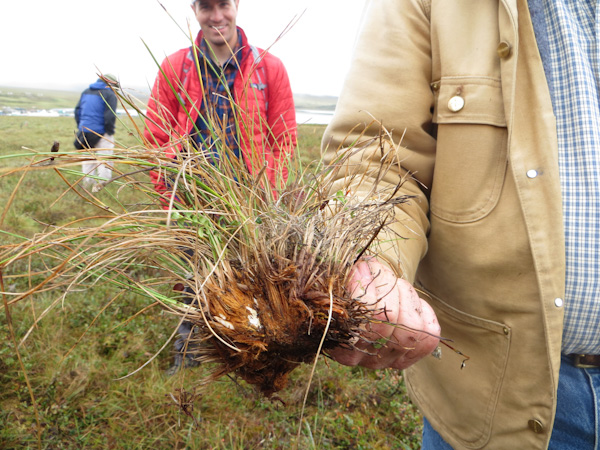 The planet might be warming, the plants and microbes shifting in response, but summer remains short at Toolik, less than three months from snow melt to snow fall. Just in the short time I’ve been here, the seasons have tipped. As scientists and students sort at Toolik Field Station, truckers haul their loads along nearby Dalton Highway, drawling to each other over CB channel 19: 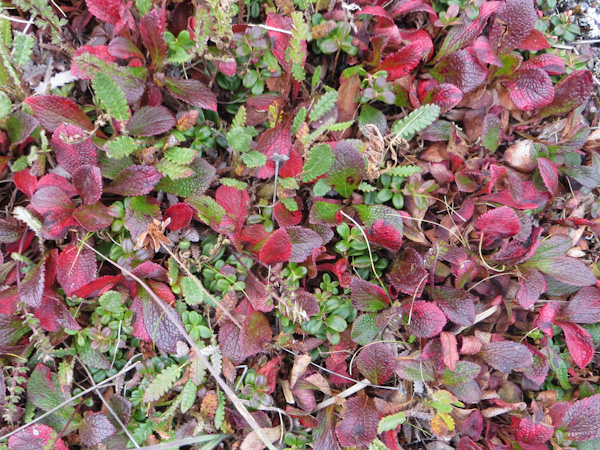 My days, too, are numbered. Two left at Toolik.