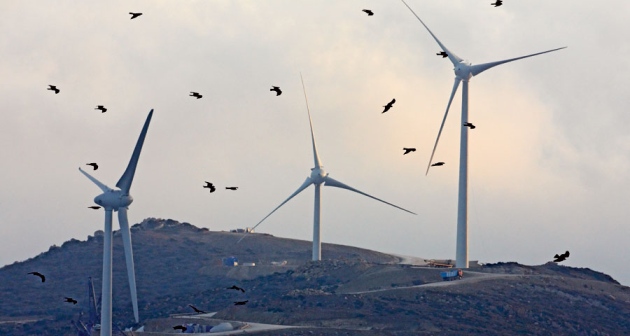 I’ve been following with interest the rapid expansion of wind energy and its impact on wildlife. Excited that I had a chance to delve into the issue for Nature magazine. Here’s how it starts:

Marc Bechard turned a worried eye skywards as he walked among the limestone hills at the southern tip of Spain. It was October 2008, and thousands of griffon vultures — along with other vulnerable raptors — were winging towards the Strait of Gibraltar and beyond to Africa. But first they had to navigate some treacherous airspace. The landscape on either side of the strait bristles with wind turbines up to 170 metres high, armed with blades that slice the air at 270 kilometres per hour.

Bechard, a biologist at Boise State University in Idaho, and colleagues from the Doñana Biological Station in Seville, Spain, had been hired to help the birds make it safely past 13 wind farms in Cádiz province. Each time the researchers spotted a raptor heading towards a turbine, they called the wind farm’s control tower. Within minutes the blades slowed to a stop, and one more migrating bird soared past unharmed. Then the turbine swung back into action.

When the biologists weren’t looking up at the sky, they were scouring the ground for carcasses of griffon vultures (Gyps fulvus), Spanish imperial eagles (Aquila adalberti) and other species. The Spanish Ornithological Society in Madrid estimates that Spain’s 18,000 wind turbines may be killing 6 million to 18 million birds and bats annually. “A blade will cut a griffon vulture in half,” says Bechard. “I’ve seen them just decapitated.”

Read the rest here at Nature…