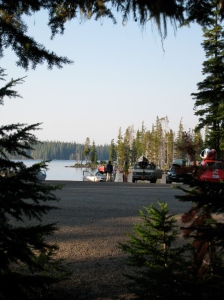 It’s been a rough day, full of dismal news and mashed up hopes, and my brother suggests I curl up with a book I love and a glass of wine. A book I love…. I scan my bookshelf, see that too many of these titles are still unread, jewels waiting to be discovered. But this, Wallace Stegner, yes, this I’ve read. This I’ve loved. Where the Bluebird Sings to the Lemonade Springs. I am flipping to page 207, to the Letter to Wendell Berry, when something breaks the rhythm of the passing pages. I turn back, pull it out. A boarding pass stub. I have no memory of where I got this book. It is just familiar, like I have always had it, though I haven’t. A United flight from Chicago O’Hare to Norfolk, Virginia on July 7. There is no year. Passenger’s name: BENEVILLE / CRAIG. He sat in 10F. An exit row.

Craig. Thudercraig. Many days have gone by, and I have not thought of him. My first lover after the big breakup. He reminded me how to laugh, pulled longing from my bones under the Christmas lights that twinkled from the roof of the bus he lived in. I’d never seen anything as sexy as his vas deferens in a bottle of formaldehyde on the shelf. When I asked, he said he’d been 80% sure. He stashed his boots under the defunct driver’s seat and the floor was covered with camping gear in a steady state of packing or unpacking, always coming and going as he went deeper into the Oregon woods to do forestry work.

There was a time when I couldn’t think of Craig without crumbling. We were lovers for two months, maybe three, until a hard conversation over a picnic by the river, when I told him I wanted someone whom he wasn’t. It was an honest conversation. And cruel, I know now. I have never been good at separating the two. It was a perfect sunny summer day, yet there was no wide Southern California smile. His eyes were clouded behind his thick glasses as he got up to go, the food I’d brought from my garden untouched. Six months later he was dead. He was a hundred feet up a tree on a government contract, using a chainsaw to make the softwood friendlier for woodpeckers when his best friend Mick heard his cry. There wasn’t anything they could do. So far out in the Oregon woods, the grand length of rope, intact, that had come spinning down with him lost in the ferns and huckleberries around his body. A knot that slipped. An oversight. A mistake that can’t be undone.

I am staring at the ticket stub, like some tap on the shoulder taking me back to a time of kisses and campfires, mud and big trees, broken guitar strings and PBRs, rivers and rafts, cider and song and sex and stars. Nobody gave a fuck about ambition. Work was what one did to cover the most basic expenses: beer and rent, the latter to be avoided if at all possible. Life was for play and touching and exploring and changing the way we inhabit the world. It was for experiencing vertical cliff faces at Joshua Tree and class five rapids from Idaho to New Mexico. I held onto his sleeping bag for a year before I could bear to wash out the smell of it – smoke and earth and delicious man – and pass it along as the donation it was supposed to be.

And Stegner’s book, now I remember. I picked it up from among his shelves, an appropriate taking, though I really wanted the little bottle that contained a piece of him. But it wasn’t mine to take, such a new friend, a recent lover who had kissed and run, a woman who still troubled him enough that he wasn’t speaking to me when he died. The weight I carry is heavier than gravity; it’s just that there’s no ground below to make it matter. That I have nearly forgotten, lost in a new life so far from the mud and fir trees, makes the breach as bad as the one on the banks of the river.

I turn the thick paper over. A black scanner bar is smeared across the top and below, it advises:

Please retain this stub and your ticket receipt as evidence of your journey.