The Society of Environmental Journalists met in Roanoke for their 18th annual conference. This was my third time attending and the gathering of 800+ journalists from around the country (and globe) is always overwhelming in its content (which can make one walk quite sure that we are, indeed, toast), inspiring in its breadth (making you once again rise to face a new day), and a good reminder that I am part of wide community of people who are telling the important stories that link humans to the physical and fragile world we inhabit. Some highlights:

I already wrote about concerns about lead poisoning from ammunition, but Marc Edwards from Virginia Tech has been studying lead in drinking water at public schools. While the EPA has set 10 ppm (parts per million) as the acceptable level (and there was discussion of this too being much too high to mitigate low-level poisoning), Edwards has found levels in the hundreds and even as high as 5,000 ppm. This is a hazardous waste level. His research found that 30% of the schools tested had elevated levels beyond EPA standards, yet there is no requirement for testing because the public water source has been deemed acceptable. “You’d have to eat six Thomas-the-Trains to get the same level as what we saw in some of these schools,” he said.

Dr. Rajendra Pachauri, chair of the IPCC, gave a keynote luncheon talk about climate change.  Someone, Dr. Pachauri said, once asked Gandhi if he wanted to see India reach the level of prosperity that Britain had. It is a question that echoes in different forms today more than ever, usually in the context of the West having no right to now tell those in the East that they have to hinder in their development. Gandhi’s response? It took Britain using resources from half the world to reach their level of prosperity. How many planets would India require? 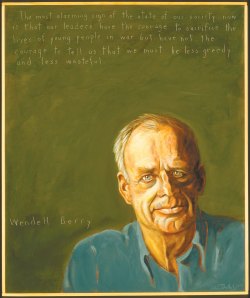 The last day of the conference was a blessing, tearing at the thin fabric of my skin after these two months on the road, on thinking about place and the creatures that fly above and what we’ve done – are doing – to the land below our feet. The conference crowds had thinned and a cold front had dusted the sidewalks with frost when we gathered around our coffee cups in the small intimate room to hear Wendell Berry – Kentucky farmer, activist, and writer – read and talk with fellow Southern authors Ann Pancake and Denise Giardina. They spoke of the greatest environmental disaster in their region, and quite arguably the country: mountaintop coal mining. While I once spent a good part of my time fighting to keep large trees standing upright upon the land, this is a battle for the mountains themselves. See images here to grasp the extent of this devastation. John Prine’s song, Paradise, came filtering into my mind.

And just in case you haven’t heard of Wendell Berry, here’s one of his classic poems, Manifesto: The Mad Farmer Liberation Front. Read this and then read more.

Here’s a video of him giving the same speech he read to us – “a speech against the state government,” he said in his introduction.

It was a room full of journalists and they asked the unanswerable question of how to get this information out so people will care, so that it will effect them. Write the stories, said Wendell, that you are authorized to tell. And find the one way to tell it. He quoted this, but I don’t know if they are his words or someone else’s. Either way, they bear repeating:

A thousand deaths, a thousand sufferings, makes a plateau. It is a bed of nails you can lie upon. But one death, one moment of suffering, one Lear, one Hamlet, is the point of sorrow.