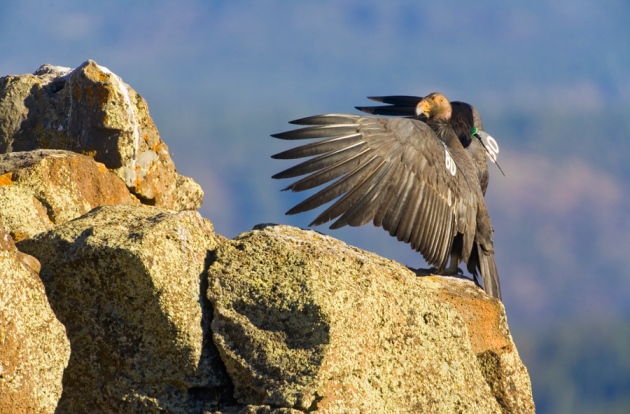 After more than three decades on the brink of extinction, the California condor (Gymnogyps californianus) — the largest and most threatened wild bird species in the United States — is making a modest recovery, thanks to intensive captive breeding and medical intervention. But troubling data reported this week suggest that unless hunters change their practices, the condor will require extensive support in perpetuity if it is to survive in the wild.

The cause of the problem is that the condors ingest lead when they feed on the carcasses of animals that hunters have shot. A multidisciplinary study published on 26 June (M. Finkelstein et al. Proc. Natl Acad. Sci. USA http://dx.doi.org/10.1073/pnas.1203141109; 2012) shows that chronic lead poisoning persists among condors, despite a 2008 California ban on the use of lead shot in regions where the birds are being reintroduced.

Building on earlier studies, the researchers collected feathers and blood samples from trapped birds and found no discernible difference in lead levels before and after the ban. Condors feed by scavenging; the results show that many of those sampled have dangerous levels of lead in their bodies. Lead poisoning can severely damage the birds’ nervous systems and impair liver and kidney function, among other problems, and it can be fatal. The study also found that approximately 20% of condors in the wild have lead levels that are high enough to require costly treatment with chemical agents to remove the toxic metal from their bodies.

“By any measure, the lead poisoning rates in condors are of epidemic proportions,” says Myra Finkelstein, a toxicologist at the University of California at Santa Cruz, who led the research….

Read the rest at Nature magazine.