Cooking on an Envirofit improved cookstove in Tamil Nadu. Photo by Meera Subramanian

I spent a good chunk of last winter stepping into women’s kitchens in rural India to see what was cooking. Rice. Rotis. Dal. Curries. But regardless of the meal, most rural homes were cooking over open fires. With the incredible support of a Fulbright-Nehru fellowship, I was working on a book about environmental stories across India, including doing research and reporting about what — if anything — was helping women move away from the polluting form of cooking with biomass. Today, the journal Nature published my piece that tells a little bit about what I found. Deadly Dinners (a heavy-handed but unfortunately devastatingly accurate title) begins:

After returning from her nine-and-a-half-hour shift as a security guard, Savita Satish Dadas begins plucking fenugreek leaves from their stems for dinner. She and her two children, along with three of their cousins, gather in a shed-like structure next to their house in the Satara District of Maharashtra, India. As goats and cows settle in for the night a few metres away, Dadas and the children sit down on a packed dirt floor around the family hearth.

Whisps of smoke rise up from their chulha, the Indian name given to a traditional cooking-stove fuelled by wood and other organic matter often gathered from the countryside. Dadas’s stove, like several of her neighbours’, is sculpted out of clay. But many make a rudimentary three-stone fire — a triangle of elevated points to support a pot — that humans have used for millennia. Dadas feeds roughly chopped logs into the stove and her hands shape moistened flour into bhakri bread, the rhythmic movement illuminated by the flickering flames.

With this simple daily act, Dadas shares a connection with more than one-third of the world’s population, the three billion people who depend on solid biomass fuels — such as wood, animal dung, agricultural waste and charcoal — or coal for their cooking needs. 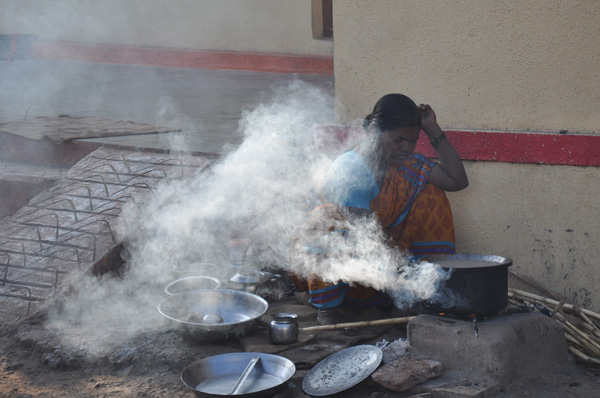 There’s also an audio slideshow where I share some of what I saw in photos and videos that capture everything except the burn of smoke in your eyes and lungs, or the rich smell of bread toasting over the flames. And a podcast.

The struggle for clean cookstoves is not a new one, but the science about how lethal these fires are – to the humans who cook over them, to the communities that breathe the ambient air they pollute, to the planet already under climatic stress from CO2 — is making the matter more urgent than ever. Hopefully, we’ll see a shift soon.