The wind was blowing crazy out here on the Cape on Friday. On Saturday morning, IFAW (the International Fund for Animal Welfare) started getting calls. The Marine Mammal Rescue and Research team kicked into full gear, calling on volunteers and New England Aquarium staff to help with the rescue of common dolphins that were being found from Eastham to Brewster. About 30 dolphins were found altogether, ten dead, making it one of the largest dolphin strandings known on the Cape. IFAW and volunteers loaded some of the rescues into trucks and brought them to Scusset Beach for release, seeking calm and deep waters where both dolphins and human helpers could successfully get the cetaceans back into the water.

When I got down to Scusset Beach, by Sagamore Bridge in Sandwich, Massachusetts, it was around one o’clock. There was one van where four dolphins were getting checked out by biologists, who were assessing stress levels, possible injuries and conducting research on dolphin sounds. It sounded like there’s still a lot of mystery around strandings. It could have been the weather, rough water or wind, or high tides that left them banked on shallow shores. One of their pod could have been hurt or dead and the others wouldn’t leave it, or a leader could have simply led them astray. The fact that they were scattered across a wide area adds to the mystery. One dolphin hadn’t made it through transport and lay covered with a sheet outside the truck.

Mary Albis, a local middle-school teacher of Latin who has been volunteering with IFAW for a decade, told me the miraculous story of how they’d found one particular animal. It was stranded in a creek ditch in Rock Harbor in Eastham, on Dyer Prince Road, in a place where searchers would likely have not spotted it. But a nearby house had a nine-year-old golden retriever that they’d just adopted last week. The dog had been agitated all night, and when they finally let it out in the morning, it ran straight to the dolphin. It’s a fine reminder of how much we humans are capable of missing.

After the physical exam, the crew used heavy tarps with handles to hoist the dolphins onto a cart with fat beach tires so they could bring it down to the water’s edge. Once they had all four down there, resting on foam pads, long noses pointed to the sea, the people in dry suits carried pairs of dolphins into the water, held them there for a few minutes to adjust, waiting for the tail flukes to begin to flap to show they were ready, and then on the count of three, they’d drop the tarp deeper into the water, releasing the creatures to head out to sea. 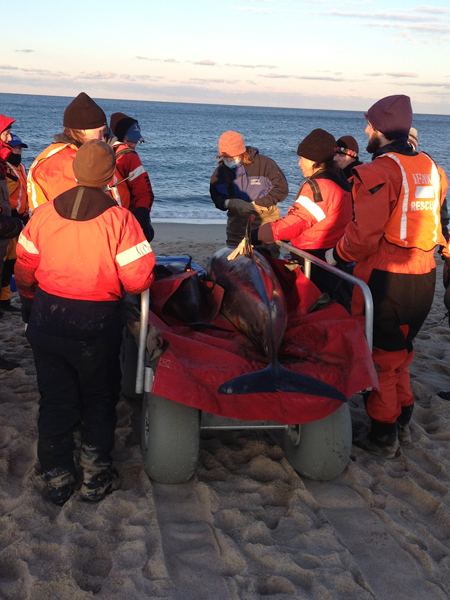 Another truck arrived with six more, including a youngster, shown here with an adult, and the process started again. One thrashed about, and the vet assessed that it was too hurt—a broken fin and more—and it was euthanized. But all together, they released nine dolphins over the course of the day.

It was magical. I’ve been writing about the Holocaust lately, and spending the off-hours watching movies like Persepolis, about the Iranian revolution, and generally getting too many reminders about how incredibly terrible humans can treat other humans. There was something restorative there in that bitter cold air, watching people go to such great measures to save these animals. I salute them.