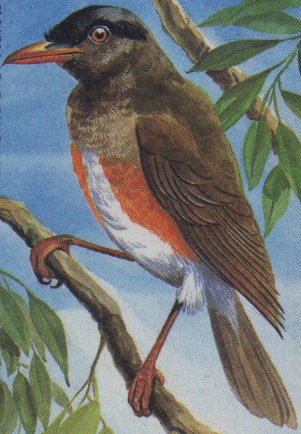 I hear from a great distance that he calls himself Harold Camping. I hear that he has studied a very old book very closely and decided that today is the day the world will end. Others believe him! I know my opinion might not count for much, but I don’t think the world will end today for the humans. There are seven billion Homo sapiens on earth, give or take, usually taking. They’re a species that like to mate, from what I’ve observed, and females are fertile every 28 days are so. It’s rumored that some pairings that have trouble with conception have various other means at their disposal to help the process, often resulting in multiple births. Each day I see more of them! That their world might end seems quite impossible!

They like to give names and the one they’ve given me is the Taita thrush. I like their way of naming, but not the way they’ve come into my forest and carried it away, stealing my home to make theirs. I awoke in a cloak of sadness this Saturday, unable to sing my morning song. I have been looking for a while now for another of my kind and I think they might all be gone. I’m having the urge to nest, but without a mate, I know it will be a futile endeavor. My friends, you see, have been disappearing for a while now, apparently risen up to some other realm. Each time we’d gather, there were fewer of us. Even when I couldn’t find them, I’d hear their call, singing through the forest. And then it was just me. No one answered my song. Maybe there is another there, across the divide, too far to hear. The Taita Hills of my Kenyan land were all one once, and I suppose the ground still connects us, but the places where we live – where I live – are only four in number now, and the distance between them is too dangerous for me to travel. And I woke up not feeling so well this morning.