There was a great egret, three feet tall if it was an inch, standing in the middle of Flood Street. Before Hurricane Katrina surged the city, there were once rows of houses instead of the weedy wild fields that now fill the expanses between the asphalt. The tall bird stood, considering, and flocks of starlings chattered in their watery language from the branches of the thick oaks that remained standing, battered but alive, nearby. I was in the Lower Ninth Ward, seeing, finally, what had happened to the city of New Orleans.

I lived there in the Big Easy once, when I was an eighteen-year-old kid trying out architecture school before leaving the school and the place in search of something and somewhere else. Then, as now, it struck me as a city from some other time, some other country. Certainly not America. The architecture, intricate and rotting; the food, heavy and complex, distending the belly; the air, wet and erotic; the divide between tourists and those who lived there — the number a fraction of what it once was — a chasm that had grown in some ways and shrunk in others. Everyone we met was kind, generous, some fierce pride about survival uniting them in defeat and resilience both.

The Prospect.1 New Orleans (P.1), apparently the largest biennial of contemporary art ever organized in the country, was taking place throughout the city, at established art museums as well as warehouses that had been transformed into museums, rough with plywood floors and alive with music and sound. There was art at the city parks and universities and Ideal Auto Repair. Outdoor installations included the frame of a woman’s house who had enough money to rebuild, until the contractor ran off with her money, leaving her nothing. Shuttle buses took us out, farther and farther from the screaming sameness of Bourbon Street – to St. Claude and then the Lower Ninth Ward, a place that no one had heard of before August 29, 2005. Rain fell from a slate sky as we passed houses still boarded up and silent. Half of the houses I saw  were still marked with the large X — spray-painted signs that rescue and recovery teams who inspected houses, one by one but much too late, left to mark their passage. A date, the agency acronym,  a marking of what they found – the number of dead.

It was the second thing I learned about New Orleans before I went there for school, (the first was that there were as many bars as churches, and a lot of both). But the second thing I learned was that parts of the Crescent City lie as much as 18 feet below sea level. It’s an impossible city. They rebuild, slowly, but the levees are still weak and more storms likely. I was reminded of my visit to a relief camp set up on the shores of south India after the tsunami. Another storm will come, someday, but, really, where else are the fisherman and their families who live in these seaside villages to go? In New Orleans, most of the people don’t live off the sea, but they do live below it. I looked at the length of the levee where a rogue barge struck during Katrina, causing or accelerating the breach that resulted in the worst of the damage. The rebuilt wall looks like an eight-foot concrete barrier. It looks insignificant. Unsubstantial. It is not angled, to help lean its slight frame against the wall of water that lies beyond.

More art stood there among the waist-high grass, an extension ladder stretching up to a suspended window frame thirty feet above, defying gravity; metal letters as tall as large child, spelled out in a circle, “HAPPILY EVER AFTER.” Mostly it was wide open space, a place for the birds that have wings to lift them out if needed, along with a few structures, widely spaces. Two trailers parked next to a double grave. The house of Common Ground Relief. A half dozen Make It Right eco-houses like splashes of child’s paint.

But much of the city is as I remembered it from twenty years ago. The stuffed artichoke from Frankie and Johnny’s. The swill at Cooter Brown’s. The smell of iron from the brakes of the St. Charles streetcar, acrid on the tongue. The rain that falls, heavy, lingering in the grand oaks whose branches reach back to the ground, as though they, too, are lazy from the heat.

Go. Remember this place that shouldn’t be there, but is. I recommend the Avenue Garden Hotel, a cozy place right on St. Charles, that is struggling to keep it together as the economy hits the city like yet another storm. Go and listen to the music, transcendent in the night. 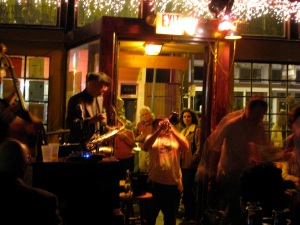 Jazz at the Spotted Cat