Just like seaside communities share a feel, their gestalt, made of salt air and sand, here too there is something that has brought back other mountain towns I have known. I flash to visits with Mott in Grenada’s Hermitage village, where behind the chocolate factory, the hill descends into a steep tangle of greenery where we would stumble down to collect callalloo. I am huffing up the hill to a house in Valle de Bravo, soon to discover forests of monarchs. With the wooden call of ravens filtering through dripping evergreens, I am in the Cascade Mountains of Oregon. Even the ride from Dehradun was a trip into the Rift Valley in Kenya, complete with vendors selling roasted corn-on-the-cob and shacks selling sodas and chips to honeymooners and young men on motorcycles. The shop shacks and homes alike are cleaved to cliffs – the contradictory meaning of cleave made clear here. What can stick fast can also be drawn asunder. It is easy to imagine the damage caused by the flooding in another part of Uttarakhand this past summer, the engineering bravery of all those hillside homes tumbling down with the force of water and gravity.

The moon has already gone from a thin shaving to a quarter moon since I arrived in Landour six days ago, the days between shrouded in clouds from what locals are dolefully calling the “bonus monsoon.” The rains started early, had finally ceased, then started again. They’ve had enough of damp mattresses. But yesterday, on the way to class, I caught my first glimpse of the true Himalayas, the great Himalayas, the snow-capped jagged peaks – barely discernible. It almost could have been a strange formation of the clouds – and yet there they were. Magnificent. By the time class was over at ten, they had vanished and the school attendant was stoking a coal fire to warm our hands by.

But by late afternoon, the skies had cleared again, wispy patches of blue amid the clouds, and the Doon Valley appeared on the other side of the ridge, where before I had only seen an endless whiteness. At sunset I caught the silvery glint of a river on the valley’s edge and at night, the lights of the city came shimmering. Late in the evening, a fireworks show exploded into the darkness, launched from the grounds of a private school perched prominently on a hill far below. Only once before, flying over Calcutta during Diwali, have I looked down upon fireworks.

With such hills there must be such thermals, but I have only sighted two raptors since I came. It feels like there should be more. And the vultures? How many would have been flying below and above fifteen years ago?

The elevation here is so great, that bags of Lay’s potato chips swell to the point of bursting with the pressure change. There is nothing left to do but pop the bag and eat them.

By the morning’s light, Dehradun is a little less magical. Twinkling lights transformed into a sprawling city, grey in hue from this distance. So many people. Every usable inch occupied. Every resource tapped. I imagine it when it was still wild, but, alas, in that mythical past, I couldn’t have traveled by trains, planes and automobiles to have seen it.

And more immediately, the massive Cyclone Phailin approaches the eastern coast, and Odisha and Andhra Pradesh prepare for the worst, while the quiet pace of Landour continues uninterrupted. 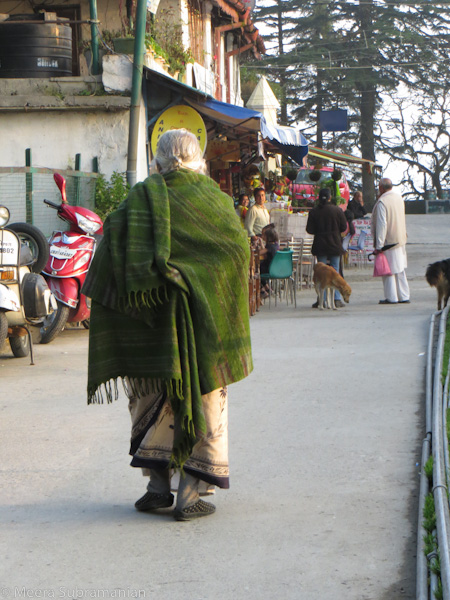