It’s the one year anniversary of the brutal gang rape of a 23-year-old physiotherapy student in New Delhi. The date also marks the night — The Times of India reminds us this morning — when a nine-year-old boy named Raju was assaulted and sodomized in the city, and Razia left her toilet-free home for relief and was attacked. It’s not just the young modern educated girls out carousing with their boyfriends (How dare she. A movie? Out at 9:00 pm?) who are at risk. It’s not just girls. The protests that erupted were in the name of Nirbhaya, the student, but they were also for these two, and for all those whose skins and boundaries have been unwillingly transgressed at the hands of another.

I’ve been thinking about this subject a lot as I’m working on my book, Elemental India, framed around the five elements. The fifth element is ether, or akash, the intangible everything between everything else, neither earth nor water, fire nor air, and yet all these things. I began thinking of ether within the context of over-population. How to talk of environmental stress, I figured, without addressing the sheer numbers of humans on the planet today? [Looking at old photographs of Mumbai a few days ago, as I write from here in this city where the colonial architecture still pervades the sense of place, dripping with age, the most striking difference is the lack of people. Oh, and their accompanying combustion-engine vehicles.]

An interest in population led me to Bihar last year, to the Indian state where birth rates remain high, even as many other Indian states have stabilized of late. I’ve been reading long reports by The Equity Foundation and the UNFPA, deconstructing Amartya Sen’s piece “India’s Women: The Mixed Truth” in the New York Review of Books and digging into primary sources. All that is research, but in the reporting there were humans. In Bihar, I met girls who defied gravity as they leapt at morsels of knowledge. I also met girls who seemed utterly grounded, defeated by their lack of options.

But a year ago, my focus on population shifted when the physiotherapy student stepped upon the bus, her boyfriend in tow. To talk about population is to talk about sex. To talk about sex is to talk about when and how and why and who. Of when the uniting of bodies or the laying on of a hand is consensual. And when it is not. And who is to be believed when the accounts conflict. Next month, I’ll have a piece in the Virginia Quarterly Review that begins to explore some of what I found in Bihar, in this larger context of India at a moment of overdue agitation.

Last Wednesday, another dimension of this non-conversation about sex emerged when India’s Supreme Court upheld Section 377 of the Indian Penal Code (IPC), an 1860 law prohibiting “carnal intercourse against the order of nature.” Though this has been interpreted as basically everything except hetero missionary style, (one commenter pointed out that even India’s family planning efforts — block that sperm! — could be seen to be as violating the law), in reality it has been used as an intimidation force against the gay community. Yesterday, Indians took to the streets again, parents pleading that their gay children shouldn’t be treated as criminals, everyone asking for the government to get out of their bedrooms.

Into my third month of a five-month Fulbright fellowship here in India as I continue research on the book, the question remains. Are things getting better, or worse, for Indian women and girls? (For the LGBT community, the answer is clear.) But there is a conversation now where there was none before. There has been a response filled with both outrage and at times, even humor. It showed as India was featured multiple times in PolicyMic’s top 28 Most Iconic Feminist Moments of 2013. Especially this one, from the light-hearted approach…

…and this from the heartfelt one:

It has been a year. Nirbhaya’s parents wait in a fugue state for the hanging of the four found guilty of the crime in an unprecedented (and too isolated) fast-track court, but the death sentences show no signs of quelling the attacks. But women and men are speaking out for human rights, and in their voices is the only hope that things will change. I’ll end with a quieter image than the one I began with. I took it last year in a village in Bihar. And with the image, I’ll pose the question: Who’s in? 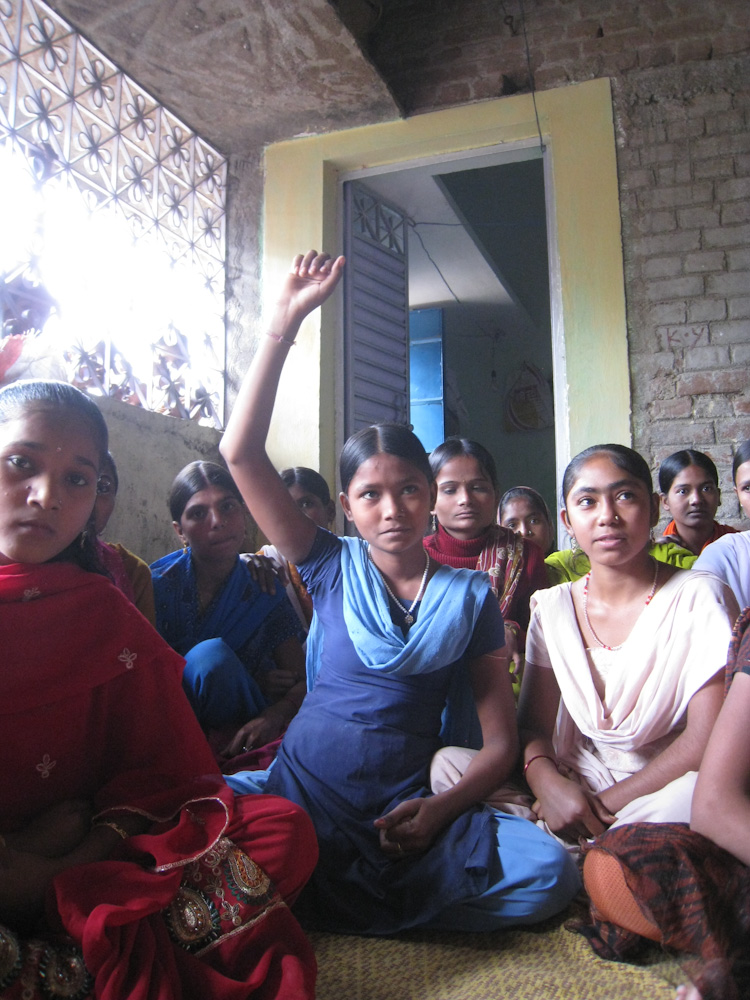 Unmarried Bihari girl volunteering to help organize training about delaying child marriage and general reproductive health. The girl in red was married a year earlier at the age of 13. Photo by Meera Subramanian ©.