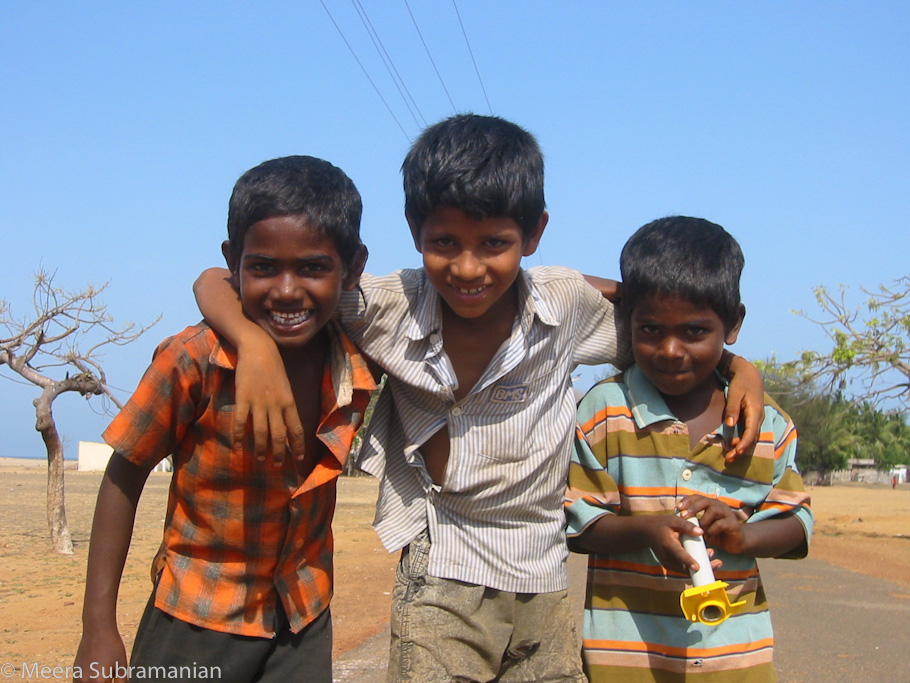 A tsunami relief camp is an unlikely stop on the way to a resort. My family – my older brother and myself, our Indian dad and American mom – were seeking to escape the heat of Chennai and the chaos of extended family for a couple days. Although not his profession, my brother dabbles in disaster relief, attending international earthquake conferences and sitting on a committee, a member of which sent him an e-mail asking him to do this fieldwork that has landed our family in this little roadside, seaside village. 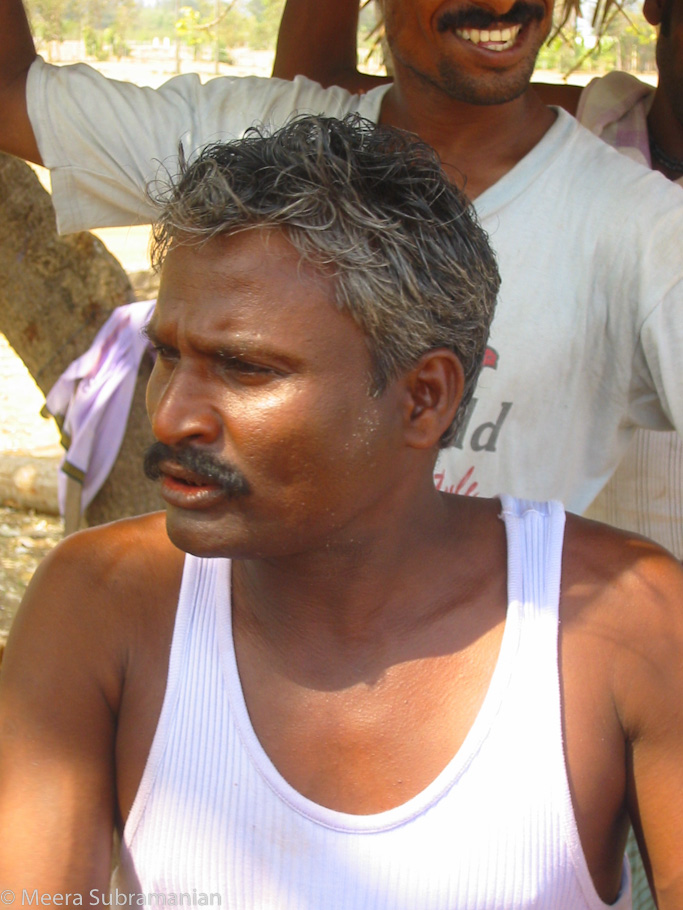 They are fisherman, and appear to be in their thirties and forties, except for the one old man with numerous missing teeth who had walked up to our car as soon as we pulled over. We parked by the colorful sign, “Karl Kübel Stiftung fur Kind ünd Familie,” the German organization that provided money, food, five new boats, and the temporary housing for this village and many others. Someone has added – personalizing the sign in a neat print and announcing their place in the world – Pattipulam, Kuppam.

Now we stand in the shade of the thatched roof, talking with one man as the others gather around us. My father translates, using the mother tongue that has lain dormant in him for 45 years, a too-big baseball cap announcing “Georgia Bulldogs” atop his small head. I lean in, asking questions, while my brother drifts on the periphery, taking photographs. Mom quietly watches us all.

Behind them, two hundred identical thatched huts are positioned tightly in neat rows. Palm leafs woven in a repetitive criss-cross form walls and roof. The beach is their floor, sand their seasoning. The simple housing measures 8’ x 12’, one room sometimes sectioned into two, a makeshift kitchen in the back. A few houses have added solid adobe floors for the porch and part of the interior, decorating the threshold with the white loops of kollum, a blessing that may have worked; of the 194 villagers, none died. But they lost everything, they tell us. “All boats lost. Simply gone,” the man says with a quick purse of the lips and wave of a dark hand. Both the government and the Germans provided relief but half a year later, it is down to the last trickle.

They are fisherman, without fish. Since the tsunami, he tells us, the sea is muddy and rough all the time, like it used to be during the full and new moons. There were widespread rumors and half-explanations after the tsunami swept this coastline: the sea has turned upside down; the fish are poisonous, but it is difficult to separate fact from fiction from fear. The skin of the man’s face is smooth, like dark polished wood, but his hair is nearly all grey and the spaces between his teeth are darkly stained. His white undershirt is clean and a Madras plaid dhoti is wrapped around his waist. “Now,” he says, smiling and eager to tell us, “We are afraid of the sea.”

Only a couple men go out to fish these days, despite the brightly painted new boats that line the beach. The man becomes animated as he tells my father something, repeating the word ippo, ippo. Now. Even today, he says, people have left the village because of a tsunami warning for the Kanyakumari District on the tip of the Indian peninsula, 250 kilometers south of here. They live with this knowledge, that the sea could return and change again from provider to taker. Ippo. Now.

The fishermen point across barren sands to their old village. It looks like an oasis from here, concrete buildings amidst a grove of palm trees, only one hundred yards from the sea, compared to these bleached out thatch huts exposed to the irrepressible sun. Will you stay here, we ask, pointing to the huts. Yes, it’s permanent, they tell us. And your old village? They answer, “It’s empty, broke.” Are they Dad’s words or theirs?

But they invite us to see, leading us down a sandy road, cows grazing on garbage to the left, an abandoned well turned saline on the right. The road leads to a small Shiva temple, indicated by the trident emerging from the sand. Immediately on the left, I see a huge fresh kollum design outside a house and as we walk through the wide paths that create the streets of this little village, I estimate that half of the houses are occupied. In a doorway, two women sit and drink tea. 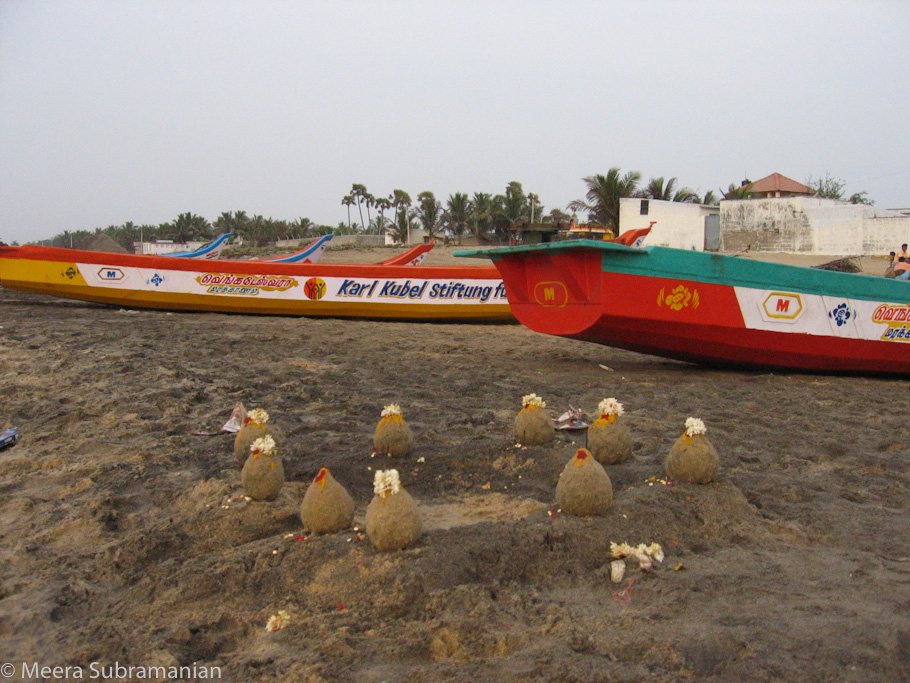 Empty? Broke? I duck into an unoccupied house that has sand up to my ankles, but seems salvageable. And there next to the temple, a dozen people are busy carrying bricks and mixing mortar for a new community building, also funded by the Germans. They are rebuilding. I am amazed. Or am I? The same thatched roofs of the relief huts that barely block the sun will be useless against the monsoon rains that will arrive in fall. Who wouldn’t seek shelter between the existing concrete walls of their old village?

And really, my brother with his educated opinion says to me later, what is the chance that another tsunami as large as the last will strike here again in our lifetime? But this “in our lifetime” phrase is a troubling one. The tricky thing about humans is that they have a tendency to procreate. One lifetime inextricably linked to the next, forming a continuum of lineage, an eternal investment in the future. Three boys pose for my brother’s camera, arms around each other’s shoulders, all grins and missing shirt buttons and a broken water pipe clenched in a hand. Some of these children were playing on the shore when the water mysteriously receded last December. They sprinted up the sand to their parents, saying, “The sea is running away. The sea is running away.”

Despite what they told us at first, they are rebuilding their village. As they build boats and repair nets, they reconstruct their trust in the sea. Aren’t you afraid, we ask. Yes, yes, of course, but what options do we have? This is their home, this stretch of beach. Land on the other side of the road, where it would be safer, belongs to someone else, and they admit, they wouldn’t want to live there anyway. Too far from the sea. A three hundred-foot commute is the most these fisherman want to their jobs for the sea has many functions for them. It is running water. It is their puja room where they set up their morning shrine of sand, decorated with coconuts and red kum kum powder, fresh jasmine flowers and incense. It is where they squat to take their morning relief as the sun rises with a golden light over the Bay of Bengal. To leave its side, even after the tsunami, is unthinkable. 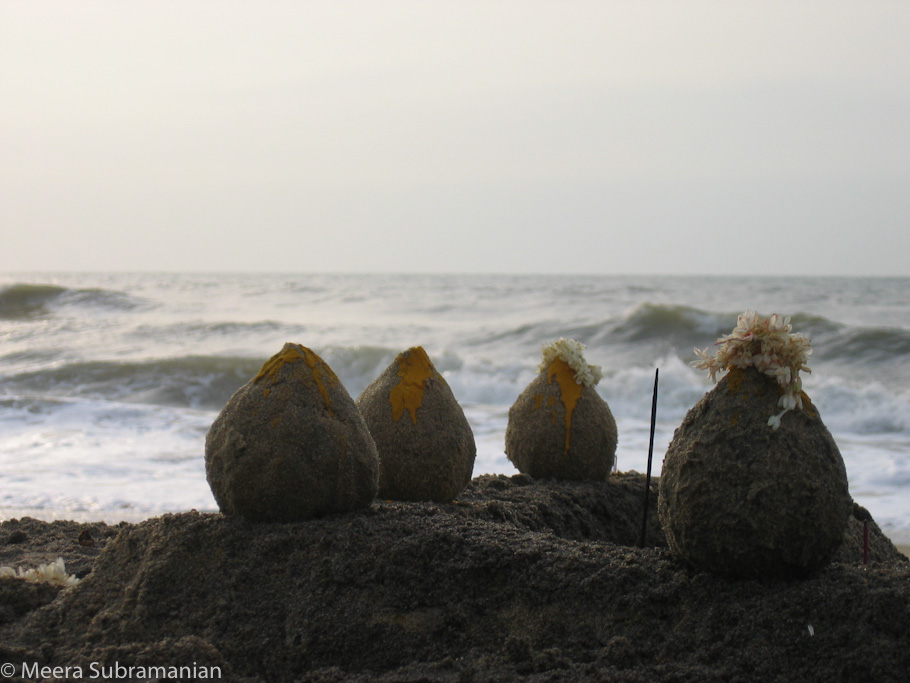