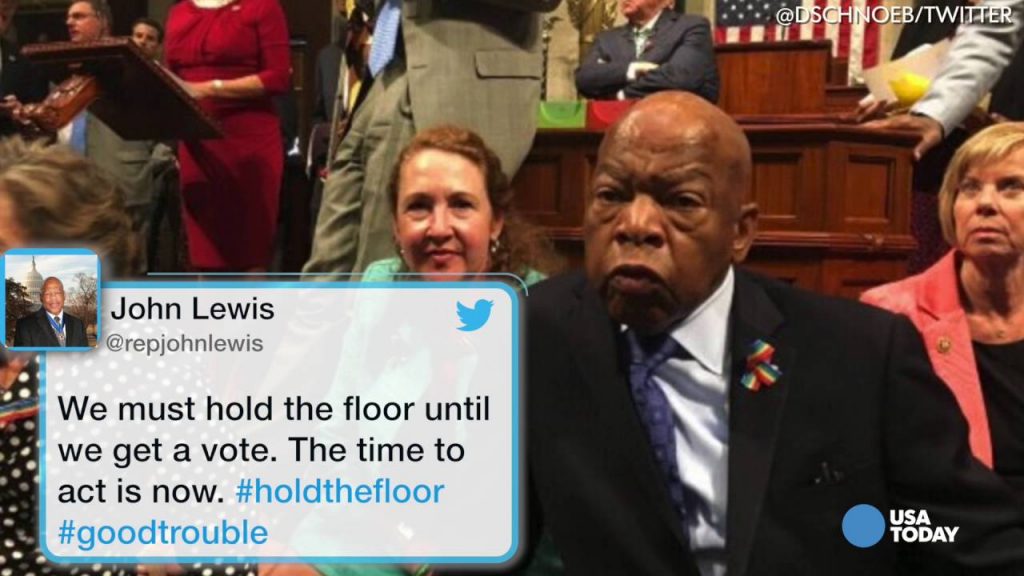 When a mass shooting of little six-year-olds in Newtown didn’t inspire gun control action, nor the 49 deaths at the massacre in Orlando, nor the thousands of other deaths that take place in America each year, I began to think that only a mass shooting in Congress could make this problem real to the elected officials who have continually blocked gun control measures. Horrid thought, I know, but that’s what crossed my mind when the Senate defeated all four bills (two from each side of the aisle) earlier this week, even though the blood in Orlando remained so fresh.

Then, yesterday, something happened. Something kind of wonderful. Democrats in the House of Representatives had a sit-in. Ole school – Gandhi – MLK, Jr. – style. “No bill! No break!” they chanted between speeches. When the CNN feed went dead, shaky cell phones brought the news out with Twitter’s Periscope live feed. (Here’s @ScottPeters.) #HoldTheFloor, #NoBillNoBreak, and #DemocraticSitIn trended.

I got excited. Proud that my representative, Bill Keating, was part of it. Wondered how long it’d last. Wondered what would come of it. I could have glued myself to the Internet to watch each moment. Instead, I decided to watch Disruption, a documentary about the People’s Climate March, which brought around 300,000 people into the streets of Manhattan back in September 2014. But this doc was about the lead-up to the March, about small organizing meetings that were happening all over the country, including labor unions and universities, African-American communities and more. It reflected back on other marches and other protests, of the community-building that happens in the process.

Rebecca Solnit wrote about this very thing in last month’s issue of Harper’s, in her essay “The Habits of Highly Cynical People.” It’s too easy to look back on a moment of action – Occupy Wall Street (OWS), Arab Spring, and let’s add a sit-in in the House of Representatives – and attempt to give it a pass-fail declaration. That’s not how it works. Would there have been such support of Bernie Sanders this year without the seeds of OWS? Solnit writes:

The inability to assess what OWS accomplished comes in part from the assumption that historical events either produce straightforward, quantifiable, immediate results, or they fail to matter. It’s as though we’re talking about bowling: either that ball knocked over those pins in that lane or it didn’t. But historical forces are not bowling balls. If bowling had to be the metaphor, it would be some kind of metaphysical game shrouded in mists and unfolding over decades. The ball might knock over a pin and then another one in fifteen years and possibly have a strike in some other lane that most of us had forgotten even existed. That’s sort of what the Easter Rising did, and what Occupy and Black Lives Matter are doing now.

There’s some evidence that the largest living organism on the planet is a fungi. Most of the mushroom’s living substance is invisible to us. The mycelia of the honey fungus create a vast underground network hidden underground through the (oh-so-beautiful) Blue Mountains of Oregon, covering about 2.4 miles. When conditions are right, up pops a mushroom, most likely in a cluster with others, sometimes covering a whole area, dense (and delicious), and then it withers, vanishing back into the earth, feeding the soil that feeds the trees and shrubs they parasitize, that they – though so tiny and delicate and nearly invisible – have the power to transform completely. Think about it.