For years now I’ve been referring to the book I’ve been working on as Elemental India. It still may retain that title when it comes out in India, but here in the United States, now that the manuscript is handed in, the facts checked and checked again, the galleys scanned for typos, and the cover art completed, it is time for a rechristening. Somewhere along the way, it became A River Runs Again: India’s Natural World in Crisis, from the Barren Cliffs of Rajasthan to the Farmlands of Karnataka. The team at PublicAffairs have been amazing to work with and we’re all looking forward to August 25th, when it shall be released. Stay tuned for news on book launch and fall events, and don’t hesitate to be in touch if you have ideas or suggestions.

Kirkus Reviews was the first to respond to the book: END_OF_DOCUMENT_TOKEN_TO_BE_REPLACED 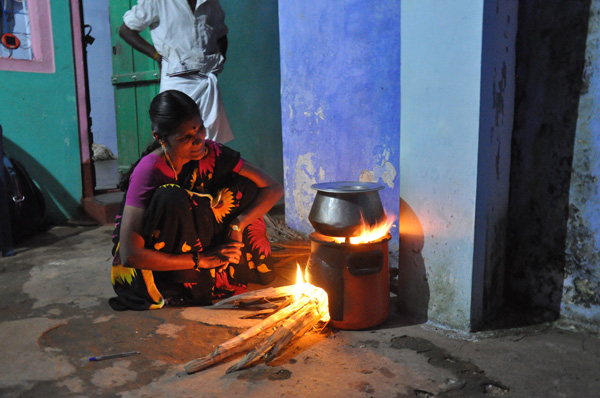 Cooking on an Envirofit improved cookstove in Tamil Nadu. Photo by Meera Subramanian

I spent a good chunk of last winter stepping into women’s kitchens in rural India to see what was cooking. Rice. Rotis. Dal. Curries. But regardless of the meal, most rural homes were cooking over open fires. With the incredible support of a Fulbright-Nehru fellowship, I was working on a book about environmental stories across India, including doing research and reporting about what — if anything — was helping women move away from the polluting form of cooking with biomass. Today, the journal Nature published my piece that tells a little bit about what I found. Deadly Dinners (a heavy-handed but unfortunately devastatingly accurate title) begins:

After returning from her nine-and-a-half-hour shift as a security guard, Savita Satish Dadas begins plucking fenugreek leaves from their stems for dinner. She and her two children, along with three of their cousins, gather in a shed-like structure next to their house in the Satara District of Maharashtra, India. As goats and cows settle in for the night a few metres away, Dadas and the children sit down on a packed dirt floor around the family hearth.

Whisps of smoke rise up from their chulha, the Indian name given to a traditional cooking-stove fuelled by wood and other organic matter often gathered from the countryside. Dadas’s stove, like several of her neighbours’, is sculpted out of clay. But many make a rudimentary three-stone fire — a triangle of elevated points to support a pot — that humans have used for millennia. Dadas feeds roughly chopped logs into the stove and her hands shape moistened flour into bhakri bread, the rhythmic movement illuminated by the flickering flames.

With this simple daily act, Dadas shares a connection with more than one-third of the world’s population, the three billion people who depend on solid biomass fuels — such as wood, animal dung, agricultural waste and charcoal — or coal for their cooking needs.

END_OF_DOCUMENT_TOKEN_TO_BE_REPLACED

Five months of a Fulbright-Nehru fellowship is coming to a close. Given that the fellowship involves both the US  and Indian governments, there was just a wee bit of paperwork. At. Every. Step. [Has anyone else ever known where I’ve slept each and every night?] As it all wraps up, there was a final report. Actually, two. A couple questions seemed worth sharing. END_OF_DOCUMENT_TOKEN_TO_BE_REPLACED

It’s the one year anniversary of the brutal gang rape of a 23-year-old physiotherapy student in New Delhi. The date also marks the night — The Times of India reminds us this morning — when a nine-year-old boy named Raju was assaulted and sodomized in the city, and Razia left her toilet-free home for relief and was attacked. It’s not just the young modern educated girls out carousing with their boyfriends (How dare she. A movie? Out at 9:00 pm?) who are at risk. It’s not just girls. The protests that erupted were in the name of Nirbhaya, the student, but they were also for these two, and for all those whose skins and boundaries have been unwillingly transgressed at the hands of another. END_OF_DOCUMENT_TOKEN_TO_BE_REPLACED

On my way back from Mussoorie, I stopped for a couple of days at Navdanya. Here’s how they describe themselves:

Navdanya is a network of seed keepers and organic producers spread across 17 states in India.

Navdanya has helped set up 111 community seed banks across the country, trained over 5,00,000 farmers in seed sovereignty, food sovereignty and sustainable agriculture over the past two decades, and helped setup the largest direct marketing, fair trade organic network in the country.

Navdanya has also set up a learning center, Bija Vidyapeeth (School of the Seed / Earth University) on its biodiversity conservation and organic farm in Doon Valley, Uttarakhand, North India. END_OF_DOCUMENT_TOKEN_TO_BE_REPLACED

It was a pleasure to join Camille Buat and the locals and travelers and students of Landour for a double-talk evening. Camille spoke about the complicated forces at work within the labor movement of the jute industry in 1930s’ Calcutta (sometimes labor won!), and I shared some photos and thoughts on the work-in-progress of Elemental India.

Days before I got on a plane to head to India to continue researching and reporting my book, it was sold in the USA. (HarperCollins India will be publishing it in South Asia.) Here’s the official announcement:

Meera Subramanian’s ELEMENTAL INDIA, a bittersweet tapestry of five stories dealing with life, loss, and survival set against the lush backdrop of India’s natural world that renders the storm of opinions around natural resources into an intimate drama, to Clive Priddle at Public Affairs, by Elise Capron at Sandra Dijkstra Literary Agency (NA).

The death of 23 schoolchildren last month in Bihar after they ate a free school lunch that was tainted with an abundantly used pesticide is just a reminder of the extensive presence of these chemicals in all facets of life in India. Last week, I spoke with radio host Carol Hills of PRI’s The World about the issue. Thanks to Peter Thomson for producing it.

India is still reeling from the deaths of 23 schoolchildren in the village of Dharmasati Gandawa in Bihar on July 17 after they ate a free school lunch that was made with cooking oil tainted with the pesticide monocrotophos. The police say that the cooking oil might have been kept in a container that once held the pesticide.

The devastating event in Bihar reveals a larger problem in India that stems from the wide use of biocides in myriad forms, in cities and villages, in homes and fields.

J. William Fulbright was an American senator from the south who fought McCarthyism and the Vietnam War, and in the time in between, set up the Fulbright program in hopes of infusing “a little more reason, and a little more compassion into world affairs.” Jawaharlal Nehru was India’s first prime minister, a man who — in the words of scholar Ananya Vajpeyi — “is himself caught up in the subtle alchemy that transforms him into the leader of all Indians and all Indians into the People of India.”

Their legacies live on in both their countries, and I’m elated to announce I’ll be tapping into that heritage as a Fulbright-Nehru Research Scholar in 2013-14. The funding will allow me to spend five months in India, reporting, researching and writing my first book, Elemental India. To say I’m not quite sure how I would have done it without this support is no small understatement. On behalf of struggling journalists everywhere, I bellow, “Thank you!”